Open to Learning
Documenting the Journey

What is computational thinking?

Scholars provide a wide variety of definitions to explain “computational thinking”.   The definitions below provide valuable insight into what it is.

In its simplest form, coding is giving a computer step-by-step instructions to tell it what to do. It takes the products of computational thinking processes and translates them into a language that computers can understand.   Learning to code, or program, is just like learning a new language. Coding can be done in many different languages (ex. Scratch, Python, Alice, Java, C ).  It can also be done through typing in script or by using block based graphical programming language.

Programs, websites, tablet and smartphone apps, computers, appliances, cars and almost all electrically devices rely on some form of code in order to operate. Code runs our digital world.

Why teach computation thinking and coding? 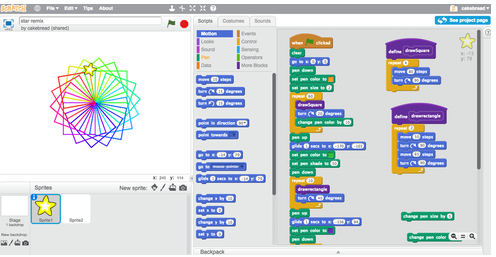 Learning to code is an important skill now we’re living in a digital age. It’s not just enough for children to know how to use technology. They should know how it works too. Learning to code doesn’t just mean you can become a developer it strengthens problem solving skills and logical thinking and supports key academic subjects such as science, maths and technology.

Seymour Papert, author of "Mindstorms: Children and Computers and Powerful Ideas" is the creator of LOGO the first programming language for engaging children.   In 1980 he suggested, "For what is important when we give children a theorem to use is not that they should memorize it. What matters most is that by growing up with a few very powerful theorems) one comes to appreciate how certain ideas can be used as tools to think with over a lifetime. One learns to enjoy and to respect the power of powerful ideas. One learns that the most powerful idea of all is the idea of powerful ideas."
Iannidou, Bennett, Repenning, Koh and Basawapatna list the following benefits for students:​
- Ioannidou, A., Bennett, V., Repenning, A., Koh, K. H., & Basawapatna, A. (2011)